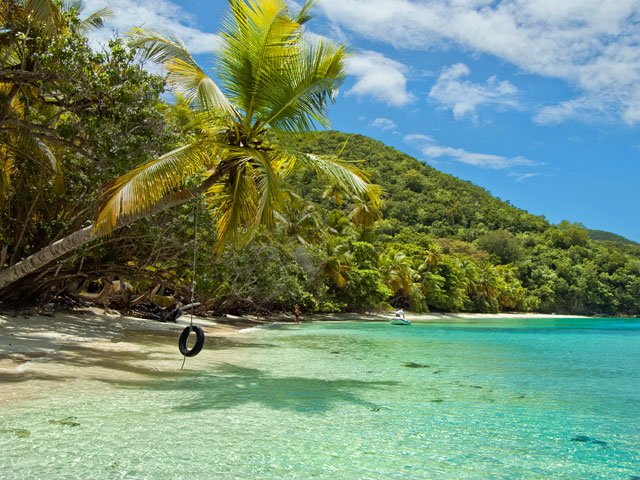 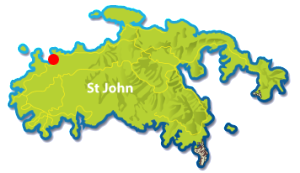 Oppenheimer Beach is located on St John’s world famous North Shore. The property is the former home of Robert Oppenheimer, The Father of the Atomic Bomb. This wonderful location is surrounded by the VI National Park and serves as a recreational center for the people of Saint John.

HOW TO GET TO OPPENHEIMER BEACH

From Cruz Bay – take Rte 20 ( North Shore Road) approximately 2 miles – just beyond Hawksnest Beach. You’ll pass a white picket fence marking the Gibney’s property. Immediately after the fence is the gated entrance to Oppenheimer Beach and Gibney Beach. Parking is limited to just a few spots along the left side of the entrance. DO NOT BLOCK THE GATE. You’ll also find a single spot across from the Gibney’s entrance – that is cut into the woods. Once there – head through the iron gate and down the paved drive. At the bottom you’ll cut along the waters edge heading west.

First: this isn’t a traditional St John beach …with soft white sand and room to soak up the sun. It’s really a beach for those that want to just hang out under a palm tree and/or swim and snorkel the aqua blue waters of Hawksnest Bay. you’ll also discover that because of its off-the-beaten-path location and very limited parking – Oppenheimer Beach doesn’t get the kinds of crowds that St John’s more popular beaches get. One other note: The property is officially a community center and serves for all types of gatherings, celebrations and can be rented out for the day. If you encounter temporary signs at the entrance gate – please respect those directions.

In 1950 the Gibneys bought fourty acres along Hawksnest Bay. That property and the home they built would become what we know today as Gibney Beach. The Oppenheimers later purchased a small parcel from the Gibneys that abuts the Gibney’s family home. Robert Oppenheimer, the “Father of the atomic bomb” built himself, his wife and daughter a small home, close to the water, that still stands. The Oppenheimer’s property eventually was given to “The people of St John” and is a recreation center today.

Snorkeling at Oppenheimer Beach is best along the eastern side. The shallow reef just off the beach is recovering from destruction inflicted during the construction of the Myrah Keating Smith Community

Health Center – high up on the ridge above Hawksnest Bay. Construction runoff caused significant damage to a once impressive reef. Fortunately the corals, sea fans and marine life are returning. Continue on along the shoreline in about 8′ to 15′ of water and the overall health of the reef increases dramatically. You’ll see a wide variety of Tangs, wrasses and snapper as well as established brain corals, sea fans, gorgonians, elkhorn and fire coral.