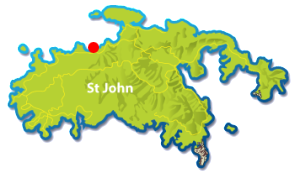 Cinnamon Bay Beach is St John’s longest beach. But only a select few know that located to the west of Cinnamon Bay Beach lies Little Cinnamon Beach. While it does require a short hike …it’s a wonderful spot to enjoy a day at the beach and one of our favorite St John beaches.

Getting there:
From Cruz Bay: Take North Shore Road ( RTE 20) out of Cruz Bay. The drive is about 4 miles of winding scenic road. You can’t miss the speed bumps and signs marking the entrance to Cinnamon Bay beach and camp grounds. Safari taxi service is available. Ample parking is available.

Little Cinnamon Beach
Visitors will walk down from parking and head to your left as you face the water. Follow the beach until you can go no further. Just off the beach you’ll see a narrow path into the woods. This rugged trail takes you along the coastline to Little Cinnamon Beach. WARNING: The “path” isn’t the easiest to navigate and proper footwear is required. It requires you to traverse rocky areas and slippery slopes. But rest assured, the effort is well worth the challenges.

The “trail” is roughly 200 yards. When the path leads through a large stone that’s split in the middle – you’ll have reached your destination. Behold, the palm fringed white-sand beach of Little Cinnamon Beach with the exclusive estates of Peter Bay in the distance. This wonderful stretch of St John beach is the perfect spot to soak up some sun, enjoy a cool drink and snorkel and swim in the aqua-blue waters!

NOTE: The winter sun is lower in the sky resulting in shadows across much of the top of the beach. Sun worshipers will likely want to catch their rays in the water or on the lower part of the beach!

Little Cinnamon Beach is inside the US Virgin Islands National Park. But you’ll find camping and glamping options at Cinnamon Bay Resort & Campgrounds or, if you travel style leans more luxury villa rental – check out places to stay at Peter Bay.