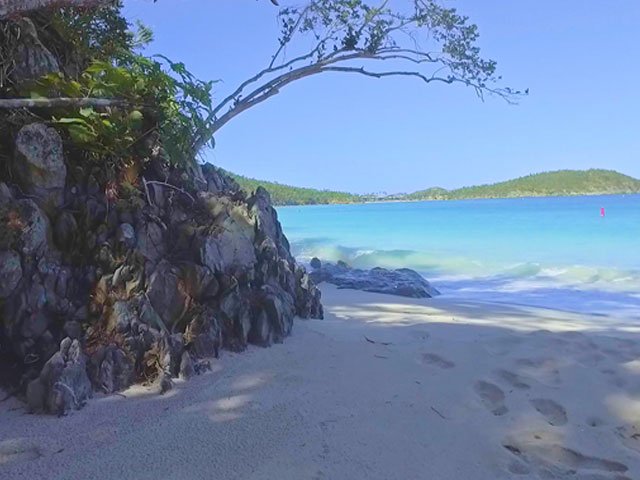 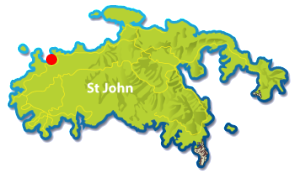 Gibney Beach is located on St John’s beautiful North Shore. The property behind the beach belongs to descendants of the Gibney family. The family’s property is surrounded by the VI National Park.

HOW TO GET TO GIBNEY BEACH

From Cruz Bay – take Rte 20 ( North Shore Road) approximately 2 miles – just beyond Hawksnest Beach. You’ll pass a white picket fence marking the Gibney’s property. Immediately after the fence is the gated entrance to Oppenheimer Beach and Gibney Beach. Parking is limited to just a few spots along the left side of the entrance. DO NOT BLOCK THE GATE. You’ll also find a single spot across from the Gibney’s entrance – that is cut into the woods. Once there – head through the iron gate and down the paved drive. At the bottom you’ll cut along the waters edge heading west.

One of St John’s true treasures …Gibney Beach. With it’s off-the-map location and limited parking – this beach sees less visitors than many of St Johns other North Shore beaches like Trunk Bay, Maho Bay, Cinnamon Bay and Francis Bay beach. And although it does require a short hike – the destination is well worth the effort required to spend some time on one of St Johns top beaches!

In 1950 the Gibneys bought forty acres along Hawksnest Bay.

The beach its self is wonderful white sand with a backdrop of well established coconut palms. Enjoy shallow sandy bottom entry to the water. Enjoy the escape from the sun during winter months by pulling back beneath the shade of the palms. During the summer months there is less shade on the beach. Surf conditions vary greatly at Gibney Beach. Although the beach is fairly protected – north shore winds and swells will sometimes make Gibney a dramatic spot with waves reaching the highest points of the beach! check from the North Shore overlook heading west – to gauge the surf and beach conditions.

The Gibney family came to St John in the mid 1940’s. A few years later they rented a home on Denis Bay – just around the point from their current home. In 1950 the Gibneys bought forty acres along Hawksnest Bay. That property and the home they built would become what we know today as Gibney Beach and Oppenheimer Beach. The latter, having purchased a small parcel from the Gibneys that abutting the Gibney’s family home. Robert Oppenheimer, the “Father of the atomic bomb” built himself, his wife and daughter a small home that still stands. The Oppenheimer’s property eventually was given to “The people of St John” and is a recreation center today.

Snorkeling at Gibney Beach is best along the eastern side [ in front of Oppenheimer Beach ]. The shallow reef just off the beach is recovering from destruction inflicted during the construction of the Myrah Keating Smith Community

Health Center – high up on the ridge above Hawksnest Bay. Construction runoff caused significant damage to a once impressive reef. Fortunately the corals, sea fans and marine life are returning. Continue on along the shoreline in about 8′ to 15′ of water and the overall health of the reef increases dramatically. You’ll see a wide variety of Tangs, wrasses and snapper as well as established brain corals, sea fans, gorgonians, elkhorn and fire coral.

Of Interest: Located about 200 yards from Oppenheimer Beach – along the eastern shoreline – snorkelers will discover a tiny pocket beach named Mermaid’s Chair or by its less popular local name Rope Beach. This remarkably small strip of sand is surrounded by black volcanic rock – with sand extending from the shoreline into 6′ to 8′ of water! It’s a fun spot – and a great photo opportunity! Enjoy!